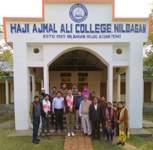 Our College at a Glance

Haji Ajmal Ali College, the institution of higher learning was put on a firm foundation in the year 1995 at Nilbagan, the newly formed Hojai District in Assam. It is an irony that even after the passage of four decades of independence, there had been no institution of higher learning until 1995. Though late, the thought of setting up an institution of higher education took shape in the minds of the intelligentsia and Haji Ajmal Ali College is the ultimate fruition of the hopes and aspirations of the people at large of this area. Formerly known as ‘Nilbagan College’, the institution was formally initiated with a few students in the TDC classes in the campus of Nilbagan Model Higher Secondary School in 1995. In 2008, the college was shifted to its permanent land and the first building of the college was donated by the famous Ajmal family of Hojai. In kind consideration to the long-felt need of a college and paying tribute to their generosity, the sponsoring body of the college renamed it as ‘Haji Ajmal Ali College’ after the name of their heavenly father. The philanthropic donors of Ajmal family have never turned a blind eye to the needs of the college. They contributed a handsome amount for the construction of the building of the college. Acknowledging their generous contribution, the local people handed over the responsibility of the Chairperson of the Management Body to Mr. Siraj Uddin Ajmal in a large meeting and since then, he has been holding the position of the same. The College has been consistently maintaining high academic standards and good institutional social responsibilities. The college is affiliated to the Gauhati University.  Now we are working hard for the future course of actions planned under the Ajmal Foundation and we need blessings and cooperation from all sides to fulfill the dream of many renowned personalities of the locality who contributed directly and indirectly to the establishment of the college.