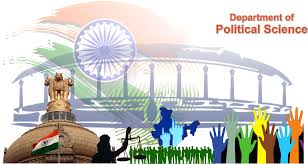 Politics, in its broadest sense, is the activity through which people make, preserve, and amend the general rules under which they live. Treated as a field of social sciences, Political Science is the study of constitution (The Constitution is the highest law of the land) of a country and different political aspects. It involves the study of governmental, non- governmental systems and operations. Accordingly, Political Science often studies the workings of trade unions, corporations or other forms of groups that need not be ‘political’ as far as law and administration one concerned but have similar complexities of governmental procedures. The study of Political Science also concerns international relations, political theories, history, political economy, foreign policies, public administration, Federation, Information Technology and a number of other academic fields. The term ‘Politics’ is applied to a particular social phenomenon as well as a systematic study. Aristotle adapted politics as the title of his famous work, he used the term to indicate a distinct branch of study. The term ‘Politics’ or ‘Political Science’ our subject of study is always concerned with a particular type of human activity. Politics is concerned with the public sector, with Parliament, elections, cabinets and has little relevance to other sphere of human activity.